Confirmation of the Prince

His Highness Prince Sverre Magnus was confirmed today in a ceremony at Asker Church, where he had received his confirmation instruction.

The church bells rang out as the members of the Royal Family took their places in Asker Church. The confirmands, including Prince Sverre Magnus, then entered in procession to the beautiful strains of Jan Garbarek’s composition “The Creek”. The congregation rose to greet the confirmands and remained standing during the ceremony’s first hymn, “Be Thou My Vision”.

Vicar Karoline Astrup, Curate Marita Elvemo Sivertsen and Faith Educator Liv-Iren Westnes conducted the service, which was also attended by the Presiding Bishop of the Bishops’ Conference of the Church of Norway, Olav Fykse Tveit.

Curate Marita Elvemo Sivertsen delivered today’s sermon. She based it on a parable in Chapter 15 of the Book of Luke about a son who returns home repentant after squandering his inheritance, but is welcomed and embraced by his father nonetheless. All must find their own way, and all make mistakes, the curate said. That is why it is so important to know there are people who have our best interests at heart, and that there is always a path home.

She ended with a quote from “Home to You”, a song by the Norwegian artist Sigrid, which was then performed by Beate Løvås Solem.The congregation said a prayer for the confirmands before Vicar Astrup called them to the altar rail: 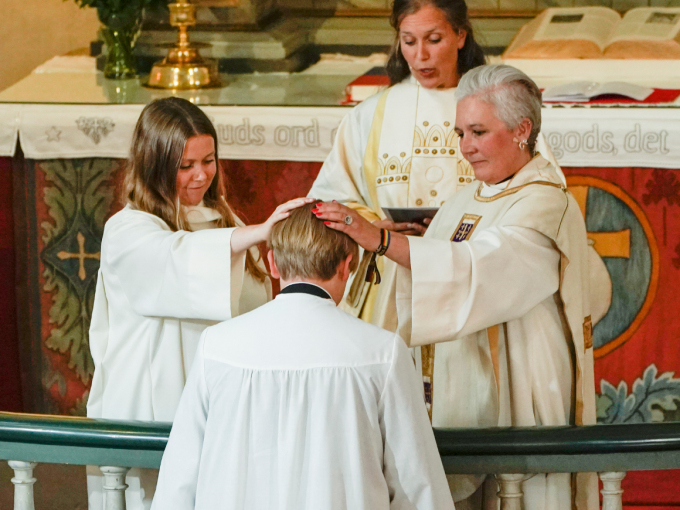 The ceremony concluded with the hymn “Thine Be the Glory” before the confirmands were led from the church. Bishop Olav Fykse Tveit accompanied the Royal Family members as they left Asker Church.

The family held a private celebration at Skaugum Estate in the evening.

The Prince was confirmed along with nine other young people. This year’s class of confirmands is actually much larger, but due to the pandemic confirmations are being celebrated in a number of smaller ceremonies instead of a common one for all. Each confirmand was permitted to invite 16 guests to the ceremony.