The Crown Prince in Washington, D.C.

After two days in New York City, HRH Crown Prince Haakon is now in Washington, D.C., for the third day of Norway’s official visit to the US.

The day started with a seminar on the Arctic, the first of the Arctic Winter series to be held at the Norwegian Embassy.

The Arctic is part of Norway

His Royal Highness Crown Prince Haakon gave the opening remarks at the seminar, and then Norwegian Minister of Foreign Affairs Anniken Huitfeldt took part in a moderated conversation with Senator Lisa Murkowski of Alaska and Senator Angus King of Maine. 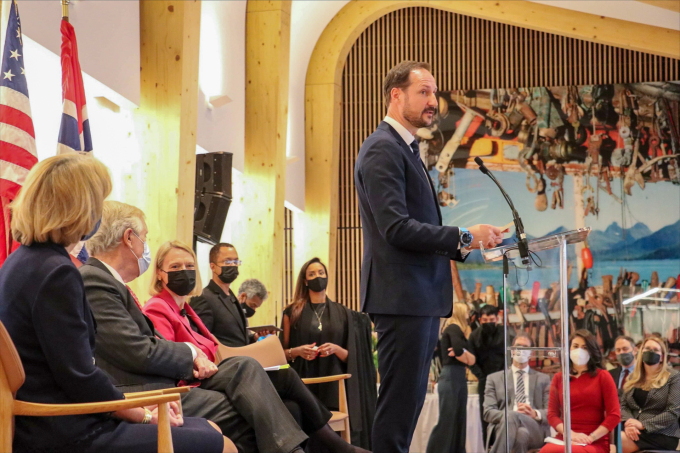 The Crown Prince spoke of the importance of safeguarding the Arctic region. Photo: Ministry of Foreign Affairs.

“The Arctic is beautiful and vulnerable. It is resourceful and rough. And it is the centre of attention for trade and security policies,” said the Crown Prince in his speech.

“Our northernmost communities are witnessing the dramatic impacts of climate change first-hand. The ice cap is melting, and air and water temperatures are rising more rapidly than anywhere else in the world.”

The rainforest must be preserved

Vulnerable nature was also the topic of the day’s next event. The Norwegian Embassy hosted a luncheon with representatives of the Norwegian and US authorities and members of the business community. The purpose of the luncheon was to discuss the preservation of the world’s rainforests and highlight the close cooperation between Norway and the US on efforts to protect the rainforest.

“The world’s rainforests play a vital role in sustaining life on Earth. In addition to its key role within biodiversity, the rainforest plays a fundamental part in our common fight against climate change,” the Crown Prince said in his speech. 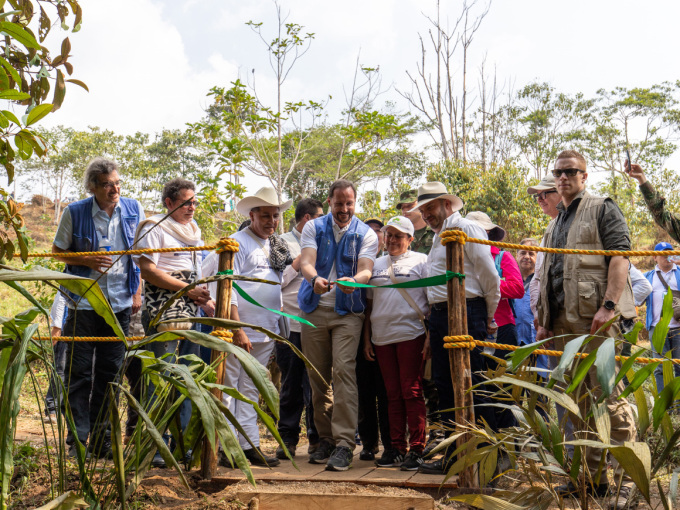 In 2019, the Crown Prince visited a rainforest in Colombia. Colombia is one of the world’s most biodiverse countries. Over 9 000 plant and animal species are found only there and nowhere else. Photo: United Nations Association of Norway / Eivind Oskarson.

Later in the day, the Crown Prince met with Speaker of the US House of Representatives Nancy Pelosi, together with Norwegian Minister of Foreign Affairs Anniken Huitfeldt and Norway’s Ambassador to the US, Anniken Krutnes.

Nancy Pelosi is third in the US presidential line of succession and has represented the San Francisco congressional district in the House of Representatives for 33 years. 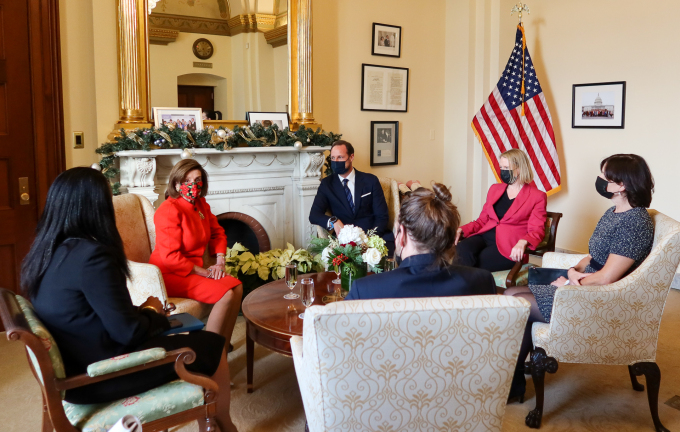 Meeting with Speaker of the House Nancy Pelosi. Photo: Ministry of Foreign Affairs.

“The US is Norway’s most important ally and partner. Our common values and interests have provided us with a strong foundation for lasting and successful cooperation,” said Crown Prince Haakon during his meeting with Ms Pelosi.

The Crown Prince last met Speaker Pelosi during a virtual official visit to San Francisco in April 2021. One of the topics of discussion then involved opportunities for expanded cooperation in renewable energy and sustainable solutions relating to the green transition in California.

Christmas tree as a token of appreciation

The next stop on the programme in a Washington, D.C. decorated for the holidays was the lighting of the Christmas tree in Union Station. Crown Prince Haakon had the honour of lighting the nearly-10-metre-tall tree, which shone brightly in the station’s main hall thanks to its 20 000 lights.

The past 25 years, Norway has presented a Christmas tree to the city each year in appreciation of US assistance to Norway during World War II.

“The tree symbolises our gratitude for the United States’ assistance during and after World War II, and the enduring friendship between our two countries ever since.

“This symbolism means a lot to me – both on a personal level and as a representative of Norway. My father, King Harald V, spent the years during World War II here, in the DC area, upon invitation of the United States President. He came here with his mother and two sisters, my two aunts, fleeing occupied Norway, and was not able to return to Norway until after it was liberated five years later.” 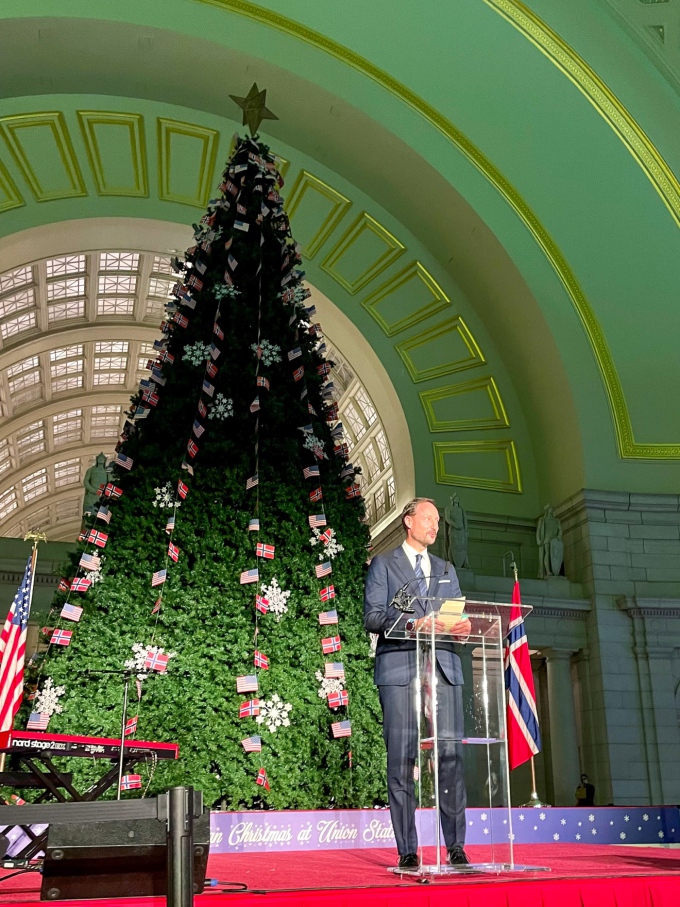 The Crown Prince lit the Christmas tree in the main hall of Union Station. This is the 25th year Norway has presented a Christmas tree to the city in appreciation for US assistance to Norway during World War II. Photo: Guri Varpe, The Royal Court. 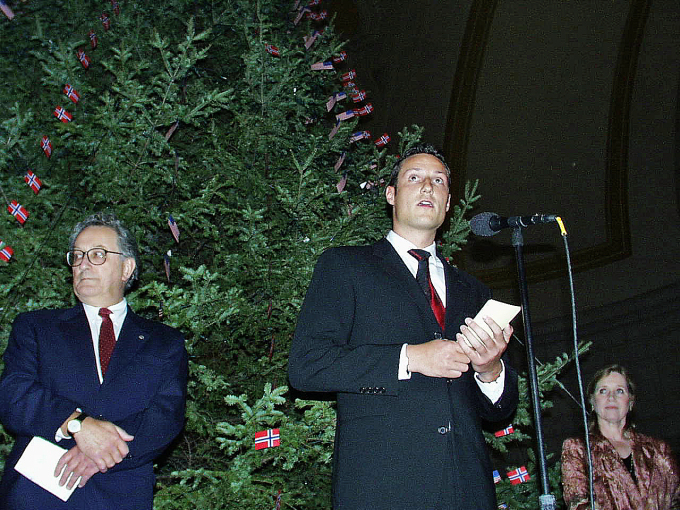 In 1998, the Crown Prince also lit the Christmas tree in Washington, D.C. He is pictured here with then Norwegian Ambassador Tom Vraalsen and actress Liv Ullmann. Photo: Helge Øhgrim, NTB.

On Wednesday evening the Crown Prince opened the new building for the Royal Norwegian Embassy in Washington, D.C. – the largest of Norway’s bilateral embassies – which has been under construction for two years. Outside in the garden, hanging fire pits were lit and a film from the Statsraad Lemkuhl expedition was projected on a wall.

The Crown Prince was greeted outside by children of Norwegians living in Washington, D.C., and was received by Norway’s Ambassador to the US, Anniken Krutnes. Inside in the beautiful new Atlantic Hall there were speeches, a formal opening ceremony and a concert featuring Norwegian percussionist Terje Isungset playing instruments of ice. Representatives of the Biden Administration and the US Congress were present, as were members of the Norwegian business sector, academia, think tanks, organisations and cultural life.

“Your presence proves what we already believe: that Norway’s friendship with the United States is a special one,” said the Crown Prince to the American guests when he opened the new embassy building.

“Our relationship with the US is important for us. Our new embassy building is a tangible result of that bond,” he said.