Today the Crown Prince and Crown Princess began an official visit to Sweden. Their Royal Highnesses Crown Princess Victoria and Prince Daniel are the hosts for the visit, which is intended to further strengthen the close ties between the countries.

"I would claim that Sweden and Norway are the world’s best neighbours," His Royal Highness Crown Prince Haakon said during the first speech of the visit.

He pointed to the length of the common border between the two countries as well as their shared history and close economic cooperation. "But more than anything," the Crown Prince said, "I think it’s that we understand each other. We share a strong commitment to similar values ​​and have similar interests. It is easy for us to work together, and in general we agree on what makes a good society." 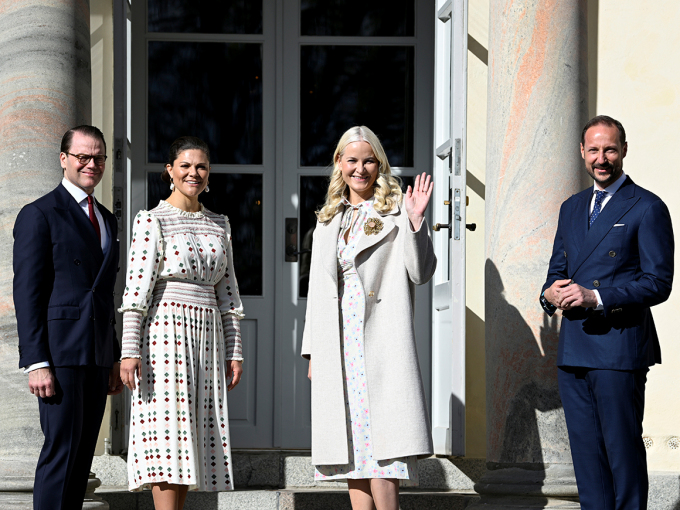 Viewed as a whole, the Nordic region is the world’s 12th largest economy. The primary purpose of the official visit to Sweden is to strengthen cooperation on green technology and knowledge-based solutions. Over the next few days, hundreds of Norwegian and Swedish companies will participate in seminars and meetings to expand collaboration in areas such as energy, transport, health technology and agriculture. The Crown Prince and Crown Princess are accompanied by Norwegian Minister of Trade and Industry Jan Christian Vestre. The business delegation consists of more than 300 participants.

"Together, Sweden and Norway can reach even more markets and take a leading role in sustainable solutions globally.” – Crown Prince Haakon

First on the programme was a business seminar at Karolinska Institutet, where representatives of Norwegian and Swedish businesses met to exchange insights and establish networks. 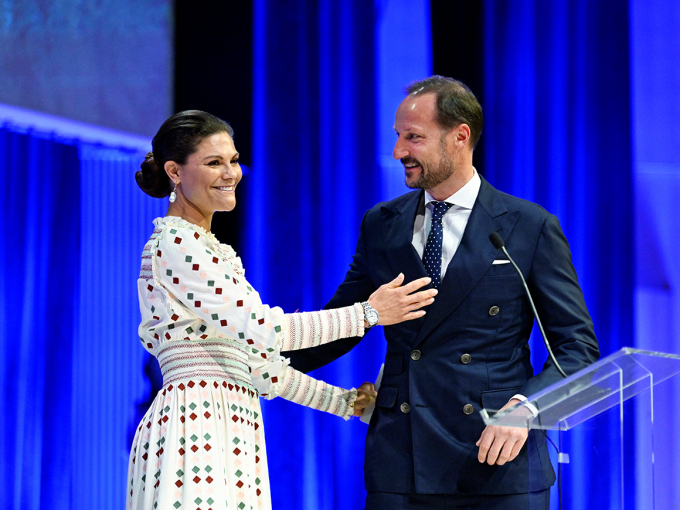 Crown Princess Victoria and Crown Prince Haakon both remarked on the potential of Norwegian-Swedish cooperation to generate opportunities at the opening of the business seminar “Norway and Sweden – stronger together than on our own”. Photo: Pontus Lundahl / TT / NTB

Norway has a great deal to learn from Sweden, which ranks second out of 132 countries in the Global Innovation Index.

"That is truly impressive, and we have great respect for Sweden’s leading role in innovation,"said the Crown Prince. "Together, Sweden and Norway can reach even more markets and take a leading role in sustainable solutions globally.

The Crown Prince's speech (in Norwegian)

The Norwegian and Swedish business communities complement each other in a variety of areas. Expanded cooperation will open up new opportunities – both bilaterally and vis-à-vis other countries. Business leaders discussed the prospect of more cooperation when they met at the Norwegian Embassy this afternoon, with Crown Prince Haakon in attendance.

From Karolinska Institutet, the visitors and hosts proceeded to Stockholm’s House of Culture (Kulturhuset), where reading and literature were the next item on the programme. Along the way, the Crown Prince and Crown Princess had the chance to greet Norwegians who are living in the area. 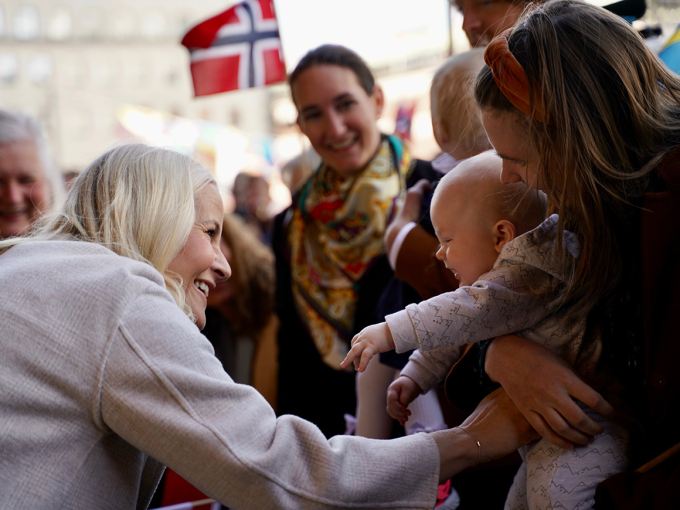 Outside the House of Culture, the Crown Prince and Crown Princess met children and other Norwegians living in Stockholm. Photo: Simen Sund, The Royal Court

Sweden and Norway both have world-class authors whose stories revolve around the key questions of our time. The literature for children and young adults addresses important and sometimes controversial topics. Good literature for this age group helps to cement a desire to read while promoting understanding across generations, cultures and national borders.

At the House of Culture the two Royal couples met children for a conversation about books. Several of the author Anna Fiske’s books have been translated into Swedish, including Hvordan man begynner på skolen (How to Start School). Likewise, Elias Våhlund’s Handbok för superhjältar (Handbook for Superheroes) has been published in Norway. Today both Fiske and Våhlund were on hand to talk with the children, who had read the books beforehand. 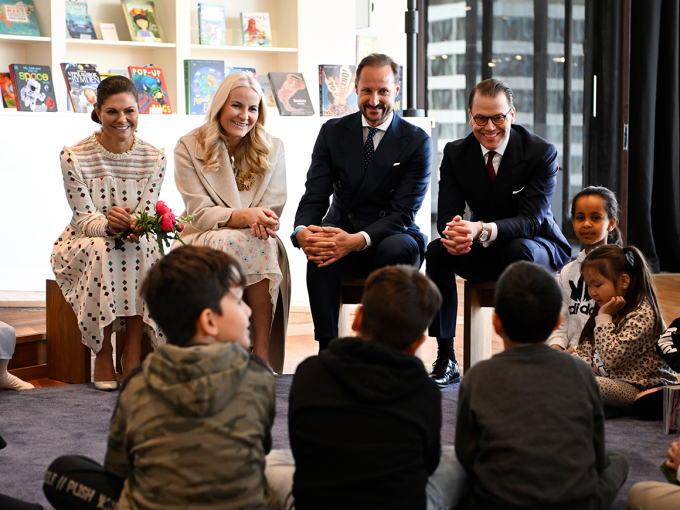 Talking about books with children in the library at the House of Culture. Photo: Pontus Lundahl / TT / NTB

The House of Culture also organised a publishing industry event in collaboration with Norwegian Literature Abroad (NORLA). The goal was to present more Norwegian authors to the Swedish market and to promote the publication of more Swedish works in Norway. The Crown Prince and Crown Princess and their hosts paid a visit to the event and listened to a panel discussion on "Bold literature for young people".

Luncheon at the Royal Palace 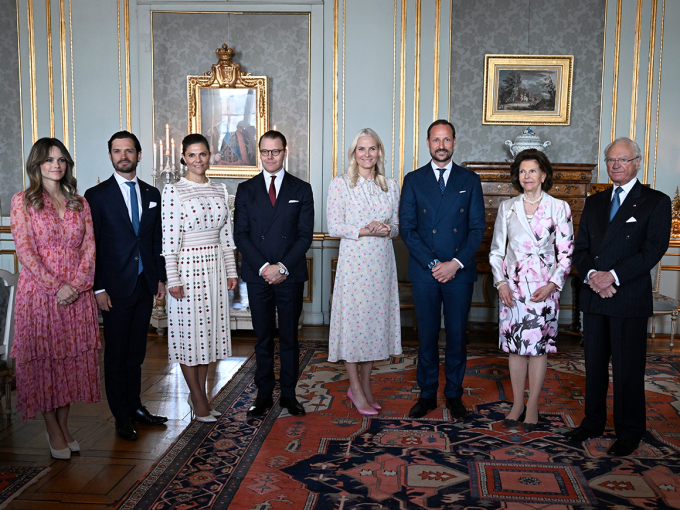 In the evening, Crown Prince Haakon and Crown Princess Mette-Marit hosted a reception at the Norra Latin conference locale in collaboration with the Norwegian Embassy in Stockholm and Innovation Norway. 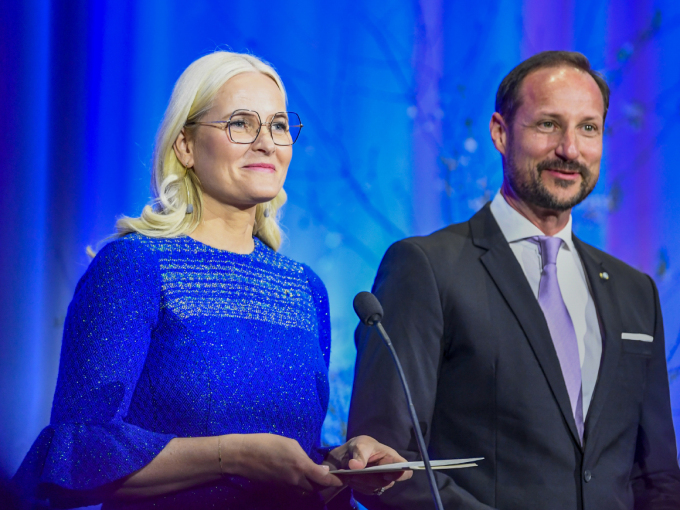 "The dark backdrop of the war in Ukraine is affecting all of our lives and serves to remind us of the importance of standing together to support our values ​​and democratic principles,” said the Crown Princess. “Nordic cooperation – and the sense of solidarity we share – have perhaps never been more important or more valuable."

"We hope we can help bring together people and ideas – to create something even better together.” – Crown Princess Mette-Marit

Some 600 guests attended the reception, including representatives of Norwegian and Swedish businesses, institutions, diplomatic and consular missions and culture. Even the music of the evening exemplified Norwegian-Swedish collaboration and innovation. Norway’s Musti and Sweden’s Jelassi are well-known musical artists on opposite sides of the border who together have released “Fuego”, a song combining the Swedish, Norwegian and Spanish languages. Accompanying them on stage were dancers from Fryshuset, a youth-empowerment group in Stockholm. 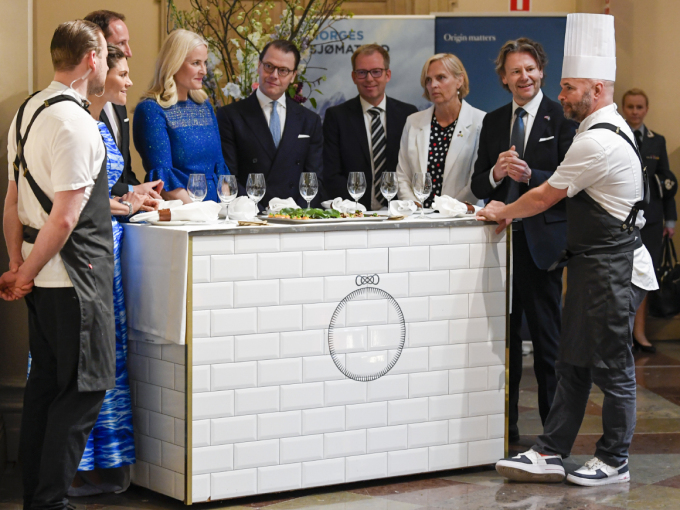 Norwegian seafood was on the menu during the reception, and the Royal couples met the chefs for a chat and some samples. Photo: Annika Byrde / NTB

Tomorrow, the visit will continue in Stockholm before concluding in Gothenburg on Wednesday.