Environmentally friendly transport on land, at sea and in the air is one of the world’s major challenges. With Norway and Sweden both at the forefront of green mobility issues, a collaboration between them could result in outstanding, competitive solutions for the global market. 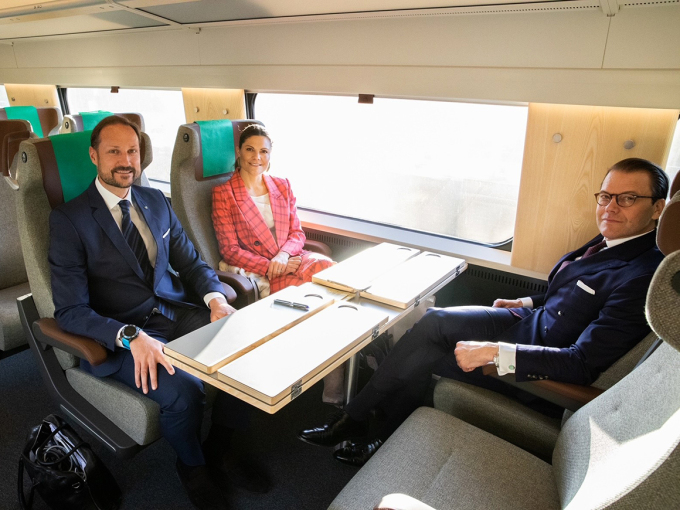 On the train from Stockholm to Gothenburg. Photo: Sara Fridberg / The Royal Court of Sweden

Green technology in the transport sector was a key topic during the opening of today's business seminar at Lindholmen Science Park, where academia, the research community and businesses combine forces.

Green mobility refers to the use of new types of fuel, technology and infrastructure as well as emissions-free vehicles and urban transport systems. Renewable energy is a key component of this. Offshore wind energy is one of the areas where cooperation between Sweden and Norway could make it possible to scale up and deliver solutions to large, international projects.

Both Crown Prince Haakon and Crown Princess Victoria spoke during the plenary opening of the seminar today.

“The opportunities for Sweden and Norway together are enormous,” Crown Prince Haakon said. “The considerable business participation we have seen during this visit shows that Swedes and Norwegians alike wish to seek even closer economic cooperation. That is because our shared challenges require shared solutions – green solutions. The potential is great.” 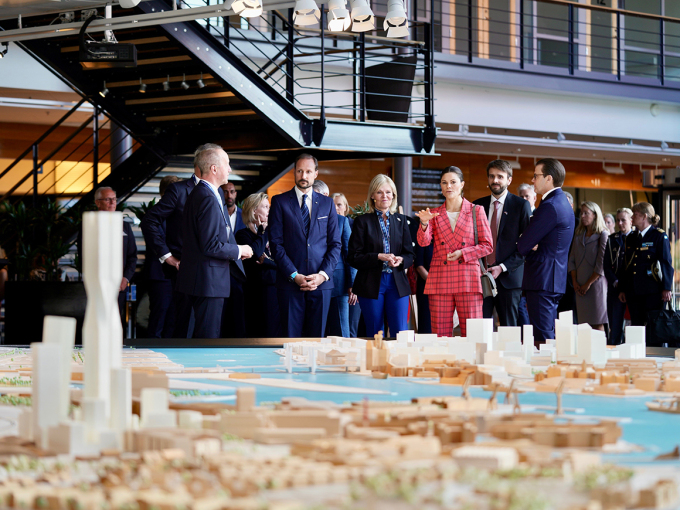 The Royal guests viewed a model of a future Gothenburg as they arrived at Lindholmen Science Park. Photo: Simen Sund, The Royal Court

International shipping accounts for 90 per cent of the world’s cargo transport. The maritime industries in Norway and Sweden have high ambitions for reducing CO2 emissions in the sector. Today the Royal guests got a close look at one of the most innovative projects: Orcelle Wind, a vessel being developed by the Norwegian-Swedish shipping line Wallenius Wilhelmsen at the Maritime Dynamics Laboratory. 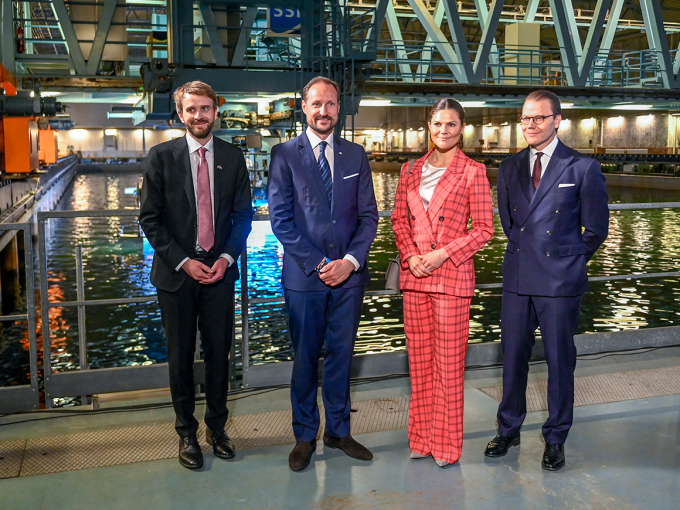 Orcelle Wind will be the world’s first wind-powered ship for transporting vehicles and could achieve a reduction in climate emissions by up to 90 per cent compared with current vehicle-transport vessels. As presently planned, the ship will be 220 metres long and will feature five retractable wing sails.

After an official luncheon hosted by the local county governor, Lisbeth Schultze, the group left to visit another ship. Sweden’s new research vessel R/V Skagerak is fitted with the equipment, laboratories and instruments needed to facilitate world-class research.

Teaching is another important activity on board. Students learn marine chemistry, biology, geology and physical oceanography in order to understand how the ocean’s many processes interact and function as a whole. 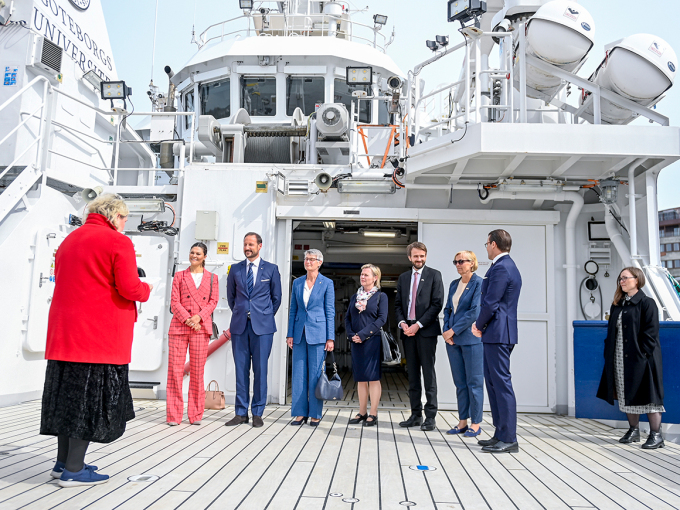 The activities carried out on Skagerak will enhance knowledge about climate change and the ocean environment and help to make Sweden a global leader in marine research and education.

As three busy and memorable days neared an end, Crown Prince Haakon, Crown Princess Victoria and Prince Daniel went to Norges Hus (Norway House) for a farewell reception. Norges Hus is a meeting point for Gothenburg’s large Norwegian community. It also houses the Norwegian Consulate General and a church. The cornerstone of the building, which was originally built as a Norwegian seamen’s church, was laid by then Crown Prince Olav in 1957.

The reception was attended by representatives of Norwegian and Swedish businesses in the region as well as other key contributors to local Swedish-Norwegian cooperation.

The Crown Prince said his good-byes to Crown Princess Victoria and Prince Daniel at the conclusion of the reception. Earlier in the day, during the luncheon with the Governor, Crown Prince Haakon gave a speech on behalf of himself and Crown Princess Mette-Marit thanking their hosts for all they had experienced.

“I would like to thank you for three wonderful days here in Sweden! The Crown Princess and I are very happy that it was finally possible for us to make this visit. As you know, we have tried several times. These days together have been a clear and positive affirmation of the excellent relations between Sweden and Norway as neighbours,” Crown Prince Haakon said.

“Crown Princess Victoria and Prince Daniel, you have been the perfect hosts. It is always such a delight to be with you. Thank you so much for making us feel at home in Sweden.”